The Arab Patrol is over 130 years old and the oldest unit in Aleppo. Two years after Aleppo was chartered, 12 Nobles started the Arab Patrol. Today the Patrol has 60 men which make up the Staff, Color Guard and two Platoons. Competitions are entered at the Northeastern Shrine Association Convention, Shrine Patrol of North America and by Invitation at other Temples. Regular drills are held at the Auditorium, Ladies’ Nights, outings and other Social Activities are enjoyed by the members. Over the years several Nobles from the unit have become Potentates. 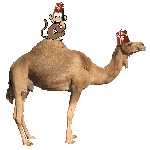 This unit is the one that organized the many stunts which highlights the initiation of candidates. The unit meets weekly for planning programs and social times. Unit members include an artist, engineers, cabinet makers, carpenters and lab technicians; all of whom contribute their “know how” to provide ceremonial entertainment.

Aleppo’s band has won many honors over the years since its organization, being originally known as a Band and Drum Corps. The stirring music of this unit is always highlight of any parade or Ceremonial.

The unit’s beautiful palominos are enthusiastically greeted as they lead the various Shrine units in parades. The Mounted unit is a charter member of the International Shrine Horse Patrol and appears not only in parades, but also on occasion, at Northeastern Shrine Association Conventions. Recently, the Mounted Patrol has rodeo “Cowboys” on horseback to the parade schedule.

The Chanters supply vocal music at Ceremonials and other functions, presenting a showcase of color, harmony and musical aptitude. Especially appreciated is their appearance at the annual Memorial Service for Aleppo’s departed members. Members enjoy gathering together for rehearsals as well as outings and sharing in Aleppo’s special program.

Easily one of the most popular units at any Shrine affair or parade, the Oriental Band with its colorful costumes, music of the musette and the drums, grows in prestige each year, with many trophies being won and displayed in the cases on the auditorium mezzanine floor. 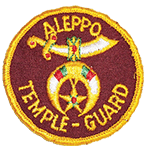 Most of the unit’s work is to guard the doors at Ceremonials and Shrine auditorium events. Meetings are held monthly in the unit room and, outings are held on occasion. The unit also participates in all Shrine parades. The Aleppo Temple Guard is a member of the International Association of Shrine Provosts. One member of the Aleppo Temple Guard has recently served as Colonel and Chief of the I.A.S.P. – Noble Stephen G. Eriksen. 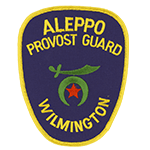 The Provost Guard was founded in 1957 for the purpose of assisting the potentate to assure the safety and welfare of the Nobility, and to perform police duties at Ceremonials, parades, conventions and Shrine functions. The original organization was composed of one Captain, one Sergeant and fifteen members. The present organization is lead by a Chief, Major, Captain and 1st Lieutenant, plus thirty very active and dedicated members. The Aleppo Provost Guard is a member of the International Association of Shrine Provosts. Two members of the Aleppo Provost Guard have recently served as Colonel and Chief’s of the I.A.S.P. – Noble Alan Ray Jr. and Noble Michael Segal. 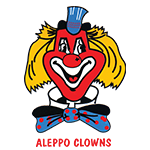 All the world loves a clown and the Aleppo Clowns are well aware of this as they receive many requests for performances at outside functions. The clowns bring joy to children and adults wherever they appear. Their bright costumes, funny faces and fantastic balloons always bring smiles from to one and all.

Aleppo’s Medical Corps works in conjunction with the Medical Staff providing emergency medical assistance. Most of its members are either Emergency Medical Technicians or have taken advanced courses in First Aid and CPR. The unit offers in house First Responder training and certification for its members along with CPR and First Aid training for other units. The unit attends all parades and stands ready to be of assistance during events held at Aleppo. 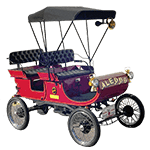 The Motor Patrol is comprised of 17 members, eleven automobiles, replicas of 1901 Oldsmobiles, and a scale model of the Shrines Hospital. Motor Patrol members are required to keep the antique cars in excellent condition as they participate in many parades and Shrine functions.

The only Colonial militia in the Shrine is proudly one of Aleppo’s outstanding units. The unit has appeared in parades far and wide, even as far as Hawaii, and has brought much credit to the Aleppo. Musters are held monthly with other social events occurring during the year. The firing of the Colonial muskets along a parade route snaps everyone to attention and the fifes and drums demonstrate the Colonial Beat.

One the most active and dedicated units of Aleppo is its Fire Brigade. Always in attendance at Temple functions, their bright red jackets are evidenced as they stand at their duty posts. They present a colorful appearance in every parade. Their five mini fire engines are an eye catcher whereever they parade.

Prized convertibles are driven by members of this unit in parades and provide transportation for dignitaries as well as senior members of other units unable to march.

The Pipe Band has made a name for itself for their authentic Scottish appearance. The swirling kilts, twirling drumsticks and strutting drum major attract much attention in parades. Many members never know how to hold a pipe let alone play one until they joined the unit, and now have become very proficient.

This is one of the most vital units in the Temple. Without the Transportation Unit, which is command of professional drivers, none of Aleppo’s equipment would be available at various parades. members provide tractor trailer transportation all over the country, north, south, east and west, for imperial Sessions and Northeastern Association Conventions. Members serve as jitney bus drivers all day Ceremonial Day as they transport Nobles from adjacent lots parking to the Auditorium.

What would a circus or rodeo be without bright, rotating lights or a spotlight on a featured performer? The Lighting Unit controls the electrical panels and provides all manner of lighting for all performance. They organized, set up and maintain the in-house sound system. They even participate in parades with no lights to worry about. 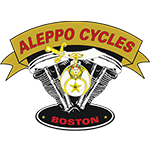 The Aleppo Cycle Unit is composed of ten 2007 Harley Davidson 883 Sportster motorcycles, which represent Aleppo Temple in parades, ceremonials, and other functions as directed by the Potentate. Within this unit is the Precision Motorcycle Drill and Competition Team, composed of eight expert precision riders who are members of the International Association of Shrine Motor Corps and the Northeast Association competition. Membership is open to all Aleppo Shriners who are either presently motorcycle riders or who are willing to learn to be one. – Why not come ride with the proudest motorcycle team in all of Shrinedom?

Another hard working group in the Temple is the Stewards Unit. They can be seen diligently at work in the kitchen, serving coffee and doughnuts, cooking hamburgers and hot dogs, making chili and other tempting food. Circuses and Roller Derby, as well as various trade shows held in the Auditorium during the year, are all busy times for them, whether they are operating the kitchen or serving the public at the concession stands. With their red Hawaiin shirts and black caps, they work hard to make every affair a success for the Aleppo Temple.

The Shriners Swing Band is a seventeen piece “Big Band” comprised of five Saxophones, four Trumpets, four Trombones, Bass, Guitar, Drums and Piano. The band members are dedicated and are all volunteers. The monies that are raised for band’s performances are donated to the Shriners Burns Hospital in Boston for patient care. 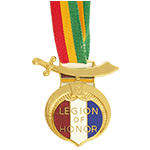 The Legion of Honor is Aleppo’s Uniformed Marching Unit. Membership in the Legion of honor is restricted to veterans and active duty members of the U.S. Armed Forces and/or former military allies of the United States, who have honorably served their country in times of war and peace. Members of Aleppo’s Legion of Honor include men who have fought in WWII, Korea, Vietnam and Operation Desert Storm. 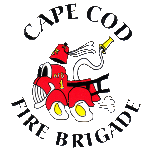 The Cape Cod Fire Brigade was founded by Illustrious Jack Grant in 2002 as a division of the Aleppo Fire Brigade. Since its inception, the CCFB has grown into a Unit that stands strong on its own.

In addition to the Aleppo scheduled parades, the Brigade books many “private” parades where they are the only Shrine Unit. Our presence in the communities of Cape Cod makes us a valuable asset in spreading the message of the Shrine and of Freemasonry.

The Mini Haulers are scale 16’ Tractor Trailers, and one of Aleppo’s newer Uniformed Parade Units.

Have you ever seen a Big Wheel? Perhaps you had a Big Wheel as a kid, or wish you did? Aleppo Drifters is a parade unit that is focused on bringing back the fun of being a kid, with a bit of a more adult twist.

There are no upcoming events at this time.