Memories fade, but the vibrancy of a photo can breathe life back into a moment frozen in time. They resurrect emotion. They awaken the past to be a part of the present and help influence our future.

Photographs represent special moments frozen in time. While reflecting on that notion, I serendipitously stumbled upon a blog by professional vocalist and cystic fibrosis (CF) patient Ashley Ballou-Bonnema, who founded Breathe Bravely, an organization dedicated to giving voice to CF through music. “CF is a progressive, genetic disease that causes persistent lung infections and limits the ability to breathe over time” (Cystic Fibrosis Foundation, 2021). Using the technology of Zoom, Breathe Bravely helps CF patients combat the effects of disease through song, allowing the true power of music to build respiratory strength and breath awareness.

Although Ballou-Bonnema’s quote refers to photographic images, “tone pictures” in music also evoke images and memories of special events and historical time periods. For example, Theodore Bendix (1862-1935), a well-known orchestra conductor in his day, compiled a montage of Civil War songs entitled “Grand American Fantasia: Tone Pictures of the North and South,” published by the Oliver Ditson Company of Boston in 1892 and described in their catalogue as being both “sentimental and frisky.”

Just last month, the Brass Band happily resumed rehearsals with “Aleppo Shriners on Parade,” a new march dedicated to Aleppo’s Uniform Units and Aleppo Shriners News. This unique composition, written during the COVID-19 pandemic, introduces the typical sounds of a marching band as well as those of our own Oriental Band, always a highlight in Aleppo parades. Practicing “Aleppo Shriners on Parade,” together with novel and familiar parade favorites, we eagerly anticipate our July 17th return to the traditional Osterville Day Parade on Cape Cod (and other long-awaited parades later this season). 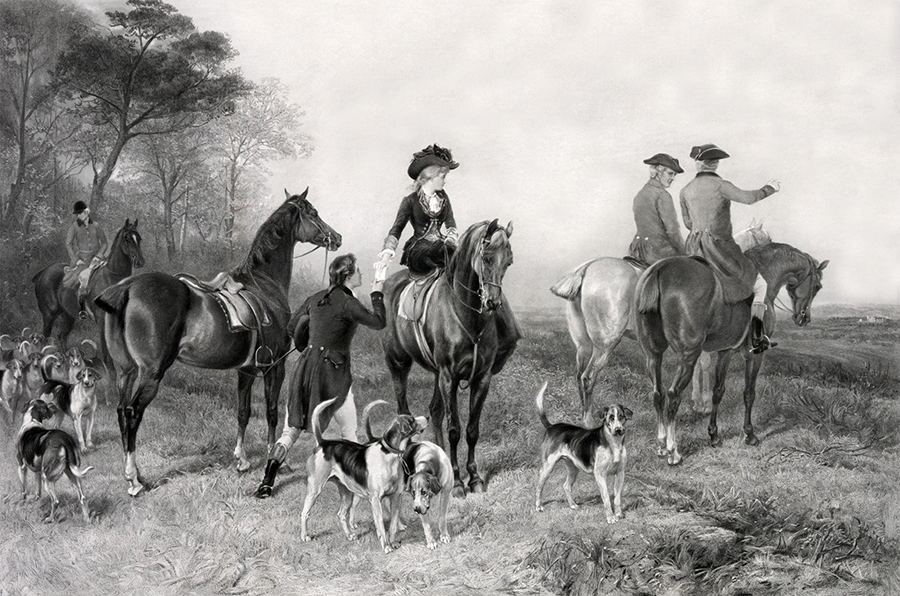 My grandmother, a fine pianist, used to say that everything had music in it. Leroy Anderson (1908-1975) would likely agree, his creative 1945 composition “The Syncopated Clock” boldly including ticking clock sounds.

Now if the sound on a real clock changes from “tick-tock” to “tock-tick” or has an occasional extra “tick” from time to time, its beat becomes syncopated, and the clock needs adjustment. Conversely, syncopation in music, where offbeats become emphasized, can make a piece interesting to hear and fun to play. Thus “The Syncopated Clock” has become a favorite in the Brass Band’s repertoire, where the “tick” and “tock” sounds are played by the percussionist on temple blocks.

Another descriptive composition in our “Tone Pictures” playlist is appropriately called “A Hunting Scene,” composed by Procida Bucalossi (1832-1918), a British–Italian composer who became the conductor of London’s Prince of Wales Theatre and also arranged dance versions of the Savoy opera melodies by Gilbert and Sullivan. In 1886, Miguel C. Meyrelles arranged Bucalossi’s composition for military band and, in 2008, a modern version of this arrangement was prepared by Andrew Glover, one of today’s foremost arrangers of band music.

This classic, colorful, and slightly “tongue-in-cheek” musical story opens with a soft and lyrical melody representing a calm and peaceful morning complemented by the chirping of birds. This is followed by bugle calls and the singing of “A Hunting We Will Go.” As the hunting party saddles up and the fox hunt proceeds, the shout of “Tally Ho!” is heard along with cracks of the horseman’s whip, dogs barking, and occasional gunshots. In short, there’s great fun for everyone in Bucalossi’s composition, which has withstood the test of time for some 133 years!

Similarly, many Spanish and Italian pieces call for the tapping and jingling of the tambourine to keep the rhythm. One such piece in the Brass Band repertoire is an original performance arrangement of “A Tazza ‘e’ Café” (“A Cup of Coffee”). This charming folk dance was composed back in 1918 by Vittorio Fassone and Giuseppe Capaldo in the style of a Neapolitan tarantella or “spider dance.” Recorded innumerable times by countless vocalists and instrumental ensembles, “A Tazza ‘e’ Café” captures and exudes all the buoyant happiness of Italian festivals.

Another is a beautiful Spanish serenade called “La Paloma” (“The Dove”) where a light, elegant touch of the tambourine is coupled with the rhythmic rattle of castanets. Imagined in the 1850s by Spanish composer Sebastian Yradier, “La Paloma” has been interpreted by opera singers, jazz, pop, and rock musicians, and military bands alike over the last 170 years. Our own Brass Brand arrangement was proudly penned by Bro. Theodore M. Tobani back in 1895. 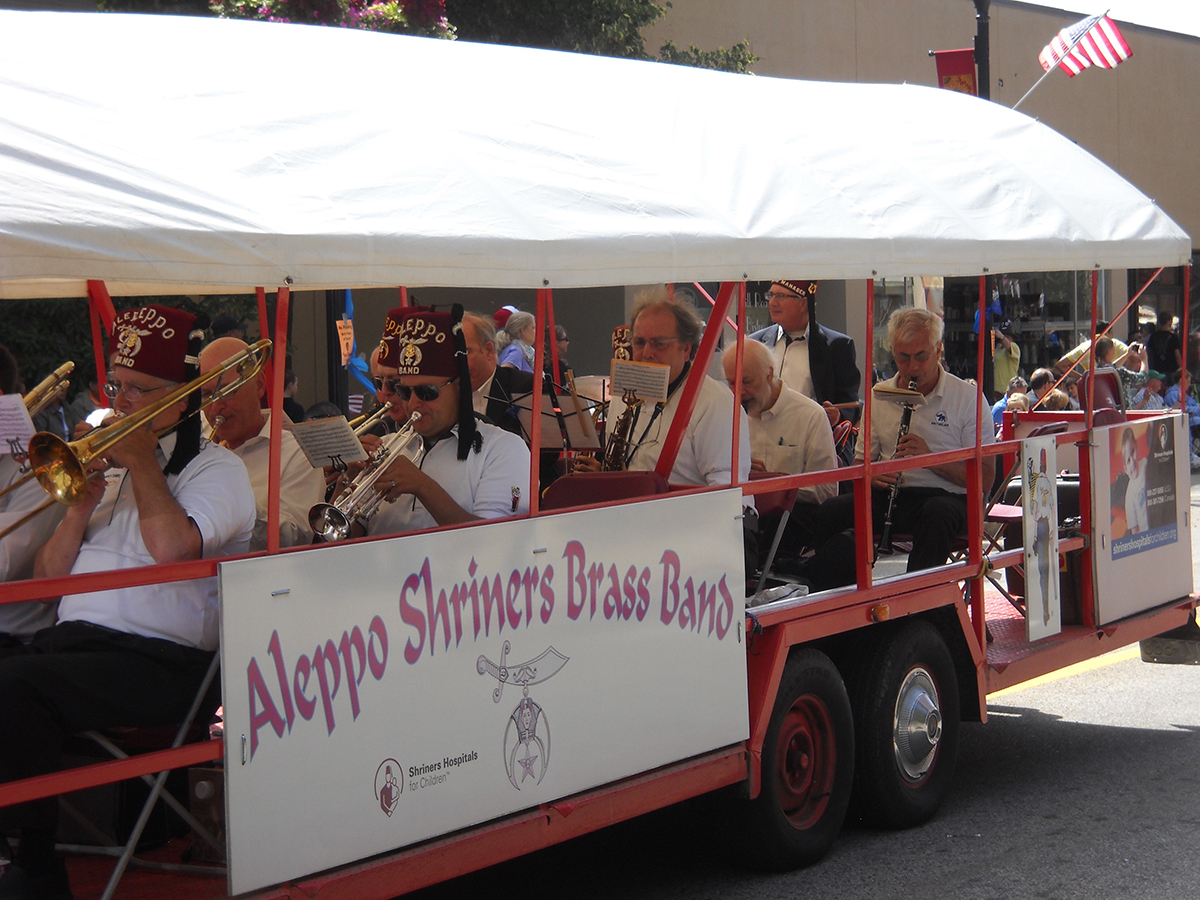 The motif is based on an episode in 492 B.C just before Darius, King of Persia, invaded Greece. Some Greek sailors reportedly observed white doves escaping from shipwrecked Persian vessels, a vision inspirationally signifying a final message of love from those lost at sea. Fittingly, “La Paloma” retains a lyrical, flowing quality, the softly accompanying rhythm instruments almost more felt than heard.

As always, the Brass Band encourages musicians at any level of proficiency to consider joining us at our rehearsals from 7:00 to 9:00 p.m. on the 2nd and 4th Thursday of each month. The time commitment is small, but the rewards are great. We are a very welcoming group and have a lot of fun as we prepare music for parades, ceremonials, and other concerts to support the good work of the Shriners Hospitals.